I would like to thank all those that read my words and have followed this Site over the years. I guess you have gleaned some insight into my very nature from my Posts; so this year I feel quite happy about sharing my family Christmas Letter. This first edition anyway!

Well it is that time of the year when we all think about our family and friends and of course sharing our Christmas Letter.

First and foremost, I must mention the most important things first. We are here and indeed if we were not here then you would not be able to have the privilege of this letter which I know you will enjoy so much. – so we must be thankful for small mercies – I could say hear hear to that – but that would be very droll!

That’s enough about talking of ourselves!

We do sincerely hope that you are there … because if you are not then I have wasted my time (there, there I didn’t mean to say that)! But if you aren’t there you will miss out on this letter – and unfortunately all our news!

All the children and family have just got that little bit older and they are not the same as last year. I expect you can understand that, and in regards to that we too have followed the same path – so I must update you on that while I think about it!

Well coming to the New Year as I know you always take great interest in our plans. First and foremost I do hope we will be here again to send you all our news in our next Christmas letter. I must add too that we sincerely hope you are there too to receive it!

I see there is little space remaining so having covered the essentials and knowing that you appreciate the usual one page limit on our letters I do wish you all a very happy Christmas and prosperous New year!

(… and of course it goes without saying everyone here says hear, hear to that)!

Best for Christmas and the New Year

Enjoy with Family and Friends 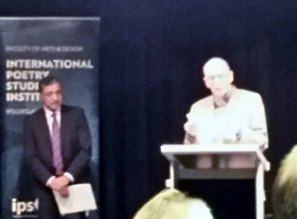 The vice chancellor of Canberra University (Professor Deep Saini) and Paul Munden  making the announcement of the winner of the 2018 international poetry competition.

Sharing what happened on the poetry scene in Canberra last week … the Canberra University faculty of Arts and Design and the International Poetry Studies Institute have a poetry festival every year called ‘Poetry on the Move’ … and they announced the winner of their annual international competition … worth a staggering $15,000 … it attracted over 1,400 entries. The well-known poet Wendy Cope was the main judge. It was interesting to note in Wendy Cope’s assessment of the entries that poetic form was somewhat absent. The Robert Frost ‘tennis net’ set aside.

The winning poem had a religious connotation … it was a poem from the Canadian poet Michael Lavers. A poem called –

‘The angel in charge of creating Earth addresses his cohort’

Here is what Michael Lavers had to say about his poem –

“In my poem’s version of the story, the making of Earth has been delegated to this novice angel and his band of beginners because, I imagine, they don’t have the skills necessary to make better, more important worlds,” …

… the poem becomes about failure, the inevitability of failure, but also, I hope, the beauty of failure. There are many aspects of planet earth that could have benefited from a more expert maker, but the poem also tries to acknowledge that it is these very flaws that make this planet and the creatures on it so surprising, so unique, and so irreplaceable.”

Looking at some lines from the poem …

… the opening …
Well who cares if more important worlds have been
assigned to those more skillful, who make crusts
that never crack, or plates too fixed to creep
or jostle or explode?

… the second line is so skilful in making a such a spelling mistake considering the poem is dedicated to failure.

He then follows with the splendours of the makeshift … it is his choice and poetic description of these ‘splendours’ that must have impressed, for example when he considers the weather …

… cold May wind, wailing and barbed and riven,
… and the landscape … coastlines ragged as a vulture’s wing
… and looking at the deserts …
Those patches we forgot to water?
Call them deserts, hide there all our
misbegotten dregs, the scorpions
and saltbush beds, blind rats, weird toads.

And of course the ‘splendours’ of a broken humanity are included …
… no two cracked the same, some warped or knotted, bent of back,
Some dragging weak-seamed hearts towards stagnation.

… the accidents of beauty, which, once realised,
can never be forgotten or undone.

In my mind an excellent poem which makes readers contemplate the failure-world and the benefit of imperfection … and a truly award-winning choice of concept and developed in a brilliant way.

The ending so positive … the failed, broken-world astounds with beauty … the incomparable, the only world … and how fitting to end with that word beauty in mind … in my last Post there is another poem where beauty dominates …. the poem ‘Sonnet to Beauty’ by Lola Ridge. So hopefully those that are particularly broken can still appreciate the ever-present beauty in our world. I will emphasize that we are all broken to some degree!

A big thankyou to Canberra University and all those staff that continue to make this event so engaging for all those that appreciate poetry!

POETRY ON THE MOVE is a festival of poetry, taking place in Canberra University and other local venues from the 14th to 21st of September 2017. Paul Munden, Festival Director,  explains this year’s program …

The theme for this year is ‘Border Crossings’ …

The theme emerged naturally. ‘Borders’ of all sorts are very much in the news, and poetry reflects that. We have an event at the National Portrait Gallery (Saturday the 16th), exploring issues of identity and migration. Another session considers cultural boundaries within Australia, led by poets who have done exceptional work with regional communities. And we’re fortunate to have a number of distinguished Japanese poets attending, so poetry in translation became another major focus, relating to the theme.

The poets-in-residence this time are …

Two wonderful poets, both from the UK. Vahni Capildeo won the prestigious Forward Prize last year for her collection Measures of Expatriation(yet another connection to the Boundary Crossings theme). And Glyn Maxwell, whose collections have also won major prizes, is particularly well known for his book On Poetry. Simon Armitage, one of last year’s guests has called it ‘the most compelling, original, charismatic and poetic guide to poetry that I can remember’.

Full details can be referenced here

There is a major international poetry competition currently open for submissions closing in May 2014 … with an exceptional monetary offering of $A15,000 for the top poem. The total prize pool is $A25,000.

This is being offered by the International Institute of Poetry Studies within Canberra University.

Apart from the financial offering the main attributes are – entries are invited world-wide, maximum 50 lines and maximum 1,000 words.

The competition is in recognition of poetry … as a highly resilient and sophisticated human activity.

I am sure the financial prizes will attract many entries … of course real poets don’t do it for the money … however all poets like recognition and the winner will certainly get that … by the way you don’t have to be a published poet to put in an entry – so it is open to anyone with a creative urge – I mention this because creative-inventive poems are the order of the day – there is a small cost for each entry …and  there is plenty of time to get working on your creation as the completion closes at the end of May 2014.

An International Poetry Studies Institute has been created at Canberra University.

… the country’s first research institute dedicated to poetry is now right here in the capital. The International Poetry Studies Institute has just been launched at the University of Canberra, as part of the newly established Donald Horne Centre for Creative and Cultural Research in the Faculty of Arts and Design. For an institute with such a grand title, its ambitions are suitably lofty – to conduct research into poetry and poets, and publish its findings internationally, as a way of “furthering the appreciation and understanding of poetry, poetic language and the cultural and social significance of poetry”.

Paul Hetherington, an associate professor and a Canberra poet, is on the institute’s management team, along with Professor Jen Webb, another published poet.

Hetherington comments … “We think that in Australia in particular, there’s this burgeoning interest in research into creativity, and also there’s a kind of resurgence in poetry all round the world” … and …

“It’s interesting that although poetry may not be a meal ticket for most poets, there’s a great proliferation of people who are interested in writing it and who are writing it. And in Australia … the national and international standing of Australian poetry at the moment is very high. We’ve got a great number of very skilled and important poets in this country, and at the moment it’s an area that’s been under-researched.”

The institute also has an online journal, Axon: Creative Explorations, established in 2011 as the faculty was testing the poetic waters. It now produces two themed editions a year containing poetry, interviews and articles from around the world.

“So far, people we’ve talked to have been very enthusiastic about this nationally, but also internationally there’s recognition of the importance of research into creativity and the way poetry exemplifies the creative process”

“Poetry presents such interesting and diverse ways of using language, it’s an interesting take and way to just look at language and how we express ourselves, how we understand ourselves.”

This anthology has been produced for the 2013 Centenary and 75 authors have contributed … they all have, or have had, some association with the Capital … here is a link to more details .