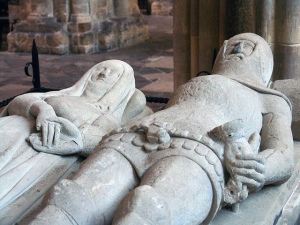 Side by side, their faces blurred,
The earl and countess lie in stone,
Their proper habits vaguely shown
As jointed armour, stiffened pleat,
And that faint hint of the absurd–
The little dogs under their feet.

Such plainness of the pre-baroque
Hardly involves the eye, until
It meets his left hand gauntlet, still
Clasped empty in the other; and
One sees, with sharp tender shock,
His hand withdrawn, holding her hand.

In all the cathedrals and churches Larkin visited he never saw such tenderness depicted in stone and he was quite moved by the sight … generating this poem.

They would not think to lie so long.
Such faithfulness in effigy
Was just a detail friends could see:
A sculptor’s sweet commissioned grace
Thrown off in helping to prolong
The Latin names around the base.

They have been together for centuries in stone whereas in life they would never lie so close given that marriages were very much a political arrangement … there is a double take too on the word ‘lie’ as there probably would have been a lot of deceit in the arrangement. The Latin names around the base probably ignored by those visiting the cathedral today – but the holding of hands an attraction to the eye.

They would not guess how early in
Their supine stationary voyage
Their air would change to soundless damage,
Turn the old tenantry away;
How soon succeeding eyes begin
To look, not read. Rigidly they

Well, the nature of marriage has changed over the years and those visiting today would view the holding of hands perhaps as a more loving union. Supine = lying on the back without energy.

Persisted, linked, through lengths and breadths
Of time. Snow fell, undated. Light
Each summer thronged the grass. A bright
Litter of birdcalls strewed the same
Bone-riddled ground. And up the paths
The endless altered people came,

I like the view of the outside while the tomb is fixed and oblivious to the changing seasons. Apparently the grounds of Chichester Cathedral are known for bird song.

Washing at their identity.
Now, helpless in the hollow of
An unarmorial age, a trough
Of smoke in slow suspended skeins
Above their scrap of history,
Only an attitude remains:

Time has transfigured them into
Untruth. The stone finality
They hardly meant has come to be
Their final blazon, and to prove
Our almost-instinct almost true:
What will survive of us is love.

We have the contrast – the truth of love – the reality of love being something different from what this time-frozen stone fixture might suggest … the important things that survive are not so much the physical –but ‘love’ (whatever this means to the reader) … but then the physical may be needed as a catalyst or prompt. It certainly prompted Larkin to think about love – and he was certainly not a ‘love’ poet – but it has been said that he was haunted by such notions although of a melancholic nature.

A YouTube video of Philip Larkin reading this poem

Your word in my ear ... Cancel reply